THE TRUTH WILL SET YOU FREE

On the “Texas Carry” Facebook group (nearly 12,000 members), a member posted a video link and opened up a discussion on the recent gun control actions in Virginia, on 30 January 2020. Among the 63 comments, I had a discussion thread where I cautioned people to follow the law, respect the law, but to also challenge the law in the appropriate way, rather than call for civil disobedience.

Here is that discussion thread.

Texas Carry Member: Well I guess it's about time for the Virginians to drag these communist Democrats from office and hang them from The Gallows.enough is enough!

My Response: I understand the frustration with Democrats, but perpetrating violence against them will not accomplish the desired goals. I was living in Egypt during the Arab Spring and I saw first-hand what happens when society collapses. It’s not a pretty sight and there are always unintended consequences. “When they go low, we go high.”

Texas Carry Member: How do you propose Virginians go high? Wait it out and put forth solid effort in future elections comes to mind - - anything else?

My Response: what I propose is that Virginians follow the law and trust the law will eventually vindicate them? It is a slippery slope to choose violence as the response. Have you lived in a society that abandoned civil law? I have... in Egypt during the Arab Spring. It’s easy to write about violence while sitting comfortably at home. It is another thing entirely to actually commit violence.

My Response: believe me that I am angry that Constitutional rights are being denied, but we should respond in a calm and deliberate way and do what the left has done for years. Be patient, be focused, and create an environment where our views will be accepted.

Texas Carry Member: regarding following the law, do you recommend any who get unjustly red-flagged willingly hand over their guns?

My Response: my arguments about following the law might make me look like a snowflake. I assure you I am not. I think it is very important to obey the law, even when we disagree. There are legal ways to oppose an obvious illegal law. Challenge it in court... knowing it will take a long time. A person might move to a different state... 1,200 new people move to Texas every day - that should say a lot about the dissatisfaction in other regions of the country. In my case, when Obama was elected, I left the country for 10 years and only came back a few months ago. If that fool Bernie or Biden or other Democrats beat Trump in 2020, I will leave the country again and take all my financial resources with me, likely never to come back.

My Response: Full disclosure. Through my marriage, I am a dual citizen of the US and Armenia, so it would be easy for my wife and I to move to Armenia and start a business there. That's my situation and certainly everyone else will have their unique circumstances. When my wife and I moved back from China last spring, I started my own conservative YouTube channel. I am now producing videos on conservative topics and issues. That's my way of trying to respond to the socialist injustices that are taking place in America today. After being gone for 10 years, the America I came back to is virtually unrecognizable to me. My father fought the Nazis in WWII and I fought the Iraqis in Desert Storm. I am very concerned about the future of America. But even with my grave concern, I will follow the law, because the alternative is too dangerous to contemplate.

Texas Carry Member: to go ahead and ask to find your limit, should the American colonists have followed British law instead of pursuing the American Revolution?

My Response: what an awesome question and one that could be debated in many different ways with many different outcomes. Here's my view. In the case of the American colonists and British law, the colonists did not have representation. The very purpose of a colony is to enrich the country that initiated the colony. If a founding country treated their colony fairly and gave the colonists full citizenship and rights, that would be one thing. However, I don't know of a single European country that ever treated their colonies with that level of fairness and respect. That should explain why those countries no longer have colonies. Well, actually there was one country that did extend citizenship... that would be the Roman Empire. Turning back to America, the reason we have the 3rd Amendment (one of 10 that form the original Bill of Rights) is because the British would house their soldiers in private homes and those families had no choice in the matter. The 4th Amendment protects from unreasonable searches, since the Colonist had no such right under British rule. In fact, you read each of the Amendments, you will find some reason for the Amendment due to mistreatment of colonists. Now, fast forward to Virginia in 2020. We, even in Virginia, are under rule of law. In the case of this travesty on the 2nd Amendment, we have a legal remedy. The citizens of Virginia can sue the state government and seek restoration of their rights. That situation is much different than what happened during the 18th Century in the 13 colonies. I realize that many of you can punch holes in what I just typed and you can find many exceptions, but this is my quick response, sitting at my laptop at this moment. These topics are exactly why I have started my Amendments Report YouTube channel. I only have a handful of subscribers and a few videos, but I am tired of remaining silent and wanting to be "politically correct." 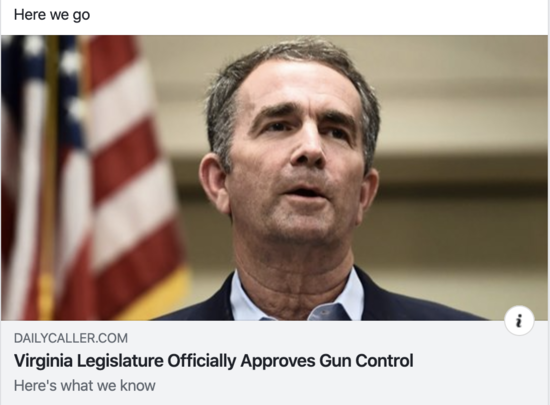